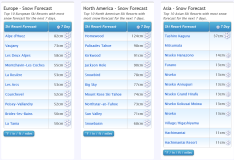 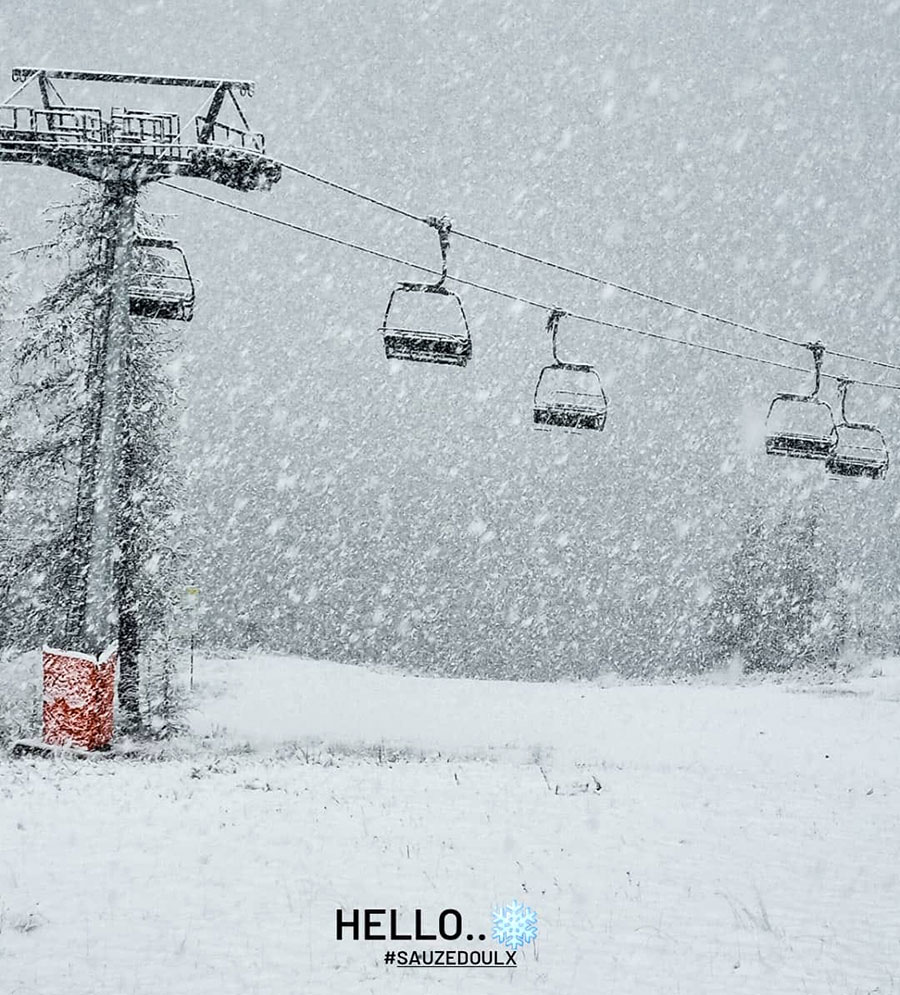 The Snow Headlines - 3rd November
- Colorado's Winter Park posts earliest-ever opening, on Halloween.
- Up to 1-2 Feet of snow forecast for the Alps To end this week
- Mammoth in California and Sunshine in Alberta open early, this week.
- Antarctic winds bring snowfall to Australia nearly a month after season end.
- No French resorts opened in October for first time in, it's believed, over 50 years.
- Canada's ski season getting underway.
- Mt Hutt, last area still open in New Zealand and southern hemisphere, ends 22 season. 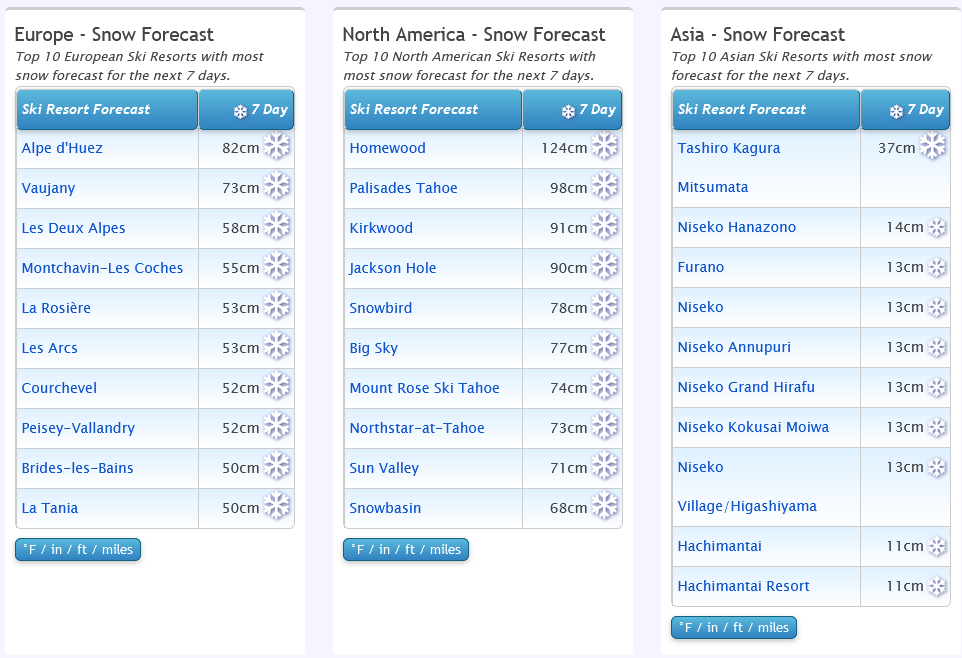 A bit more winter in the forecast...

World Overview
November is looking more promising than all of October in many ski areas. In North America, there's been increasingly heavy snowfall in the west, including snow in California, and more than a dozen ski areas will be open this weekend including Mammoth, ski centres in Banff and the first in Utah for the season. Several of these are opening early.

In the Alps, we appear to be on the cusp of the first 'decent dump' of the autumn, hopefully, over the end of this week and through the weekend which will hopefully get things looking much better and stop the stalled season openings for high altitude resorts. It may not be massive, but it's a start.

Elsewhere there's been the first significant snowfall on peaks in Scotland, more snow in Japan and unusually heavy snowfall (up to 35cm) reported on Australia's ski slopes where the 2022 season ended nearly a month ago and summer starts in under four weeks.

Europe
Austria
Austria continues to be the country with the most ski areas open in the world at present. Although the USA is set to overtake it this weekend as more centres open there whereas Austria has had the same dozen or so glacier resorts open for a month now with little change after a largely dry and sunny October.

November is looking more promising with snow forecast this week and high altitude areas which aren't glacier dependent like Obergurgl and Obertauern set to open in just a fortnight's time now. For now though Hintertux's 35km of open slopes is the most anywhere in the world. The other five glaciers open are Kaunertal, Kitzsteinhorn, Pitztal, Solden and Stubai.

The Dachstein is also open for cross-country skiing only.

France
Sadly there was no ski area open in France in October, which isn't thought to have happened for more than five decades. Neither les 2 Alpes nor Tignes, the two areas that had hoped to open by now, were able to due to the lack of snow on their glaciers after a predominantly dry autumn following a record-hot summer.

Tignes still say they'll open if there's a good snowfall but currently Europe's highest resort of Val Thorens is the earliest French resort opening date on the books – in a fortnight's time.

That said, the coming week is looking much more promising with at least a foot of snow forecast over the weekend and high mountain passes closing as a precautionary measure. Fresh snow has already been falling on high slopes over the past few days, including at Tignes, so perhaps it may still be first after all?

Italy
Italy too has had another fairly dry, mostly sunny week with little change to report on seven days ago.

Bormio did say they had 30cm of snow lying at the top of their slopes but it was unclear how freshly fallen that was.

There are the two glacier areas at Passo Stelvio and Val Senales open although it is believed this is the final weekend of the season at Stelvio (which is mostly open from June to October) unless it extends.

Cervinia also continues to provide access to the glacier slopes above Zermatt just across the border.

Cortina was unable to open their first slopes on the final weekend of October as they'd hoped, but the start of November is looking more promising here too with colder temperatures and snowfall forecast over the next seven days.

Switzerland
Swiss glacier ski areas are in a similar position to the rest of the alps with the warm, dry October (following a hot spring and summer) making conditions less than ideal.

The same three areas that have been open, mostly for over a month – Engelberg, Saas Fee and Zermatt – remain the only three open while areas that would like to be including Andermatt, Adelboden and the Diavolezza Glacier near St Moritz, are on hold.

A decent fall of snow is Forecast for the weekend though so that might get things moving at last. Saas Fee is posting the deepest snow depth of an open area – 1.4 metres.

Scandinavia
More and more Scandinavian ski centres have been getting a taste of winter with the majority due to open later this month.

Hemsedal was one of the latest to post images of its slopes turning white. For now though the same handful of centres remain open.

In Finland Levi and Ruka opened thanks to snowfarming, but now topped up with fresh snowmaking and natural snowfall. Then Sweden's Kåbdalis used the same technique to open a run and Norway's Galdhopiggen summer ski glacier is still open for a few weeks more.

Lake Louise and Mount Norquay, two of Banff's three ski areas, were set to be first to kick off the country's ski season this weekend after over a week of cold weather and several feet of snowfall, but Banff's other ski area, Sunshine, has now decided to open a week early, from Thursday 3rd November, opening its strawberry terrain.

Two other Albertan ski centres, Nakiska nearest to Calgary and Marmot Basin near Jasper to the North, also plan to open in the next week, all being well.

Lake Louise is now set to host the first World Cup downhill races of the winter.

More snowfall was reported on high slopes in the east in Quebec and Ontario too where several resorts including Mont Tremblant have turned on their snowmaking guns. It keeps snowing in the west.

USA
It's beginning to feel a lot like winter in the US, particularly the Western side of the country, with the second week of cold temperatures and moderate to heavy snowfall in the mountains, some areas (not yet open) have now had more than four feet (1.2 metres) of snowfall in the past fortnight.

Colorado hasn't had the heaviest snow but most areas have had a decent dump for this early in the season and combined with October snowmaking Arapahoe Basin, Keystone, Loveland and Winter Park are now open with Wolf Creek saying they'll open for the weekend.

A good dump in California has also led to Mammoth saying they'll open about a week earlier than expected, this Saturday 5th November and Utah's first ski area to open, also this coming weekend, will be Brian Head.

With several areas still open in the Midwest it means the US will have the most ski areas open and the first to be back in double figures for areas open since last spring.

Not so much snowfall in the East but it has been cold enough for snowmaking overnight.
The Admin Man