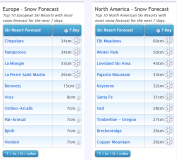 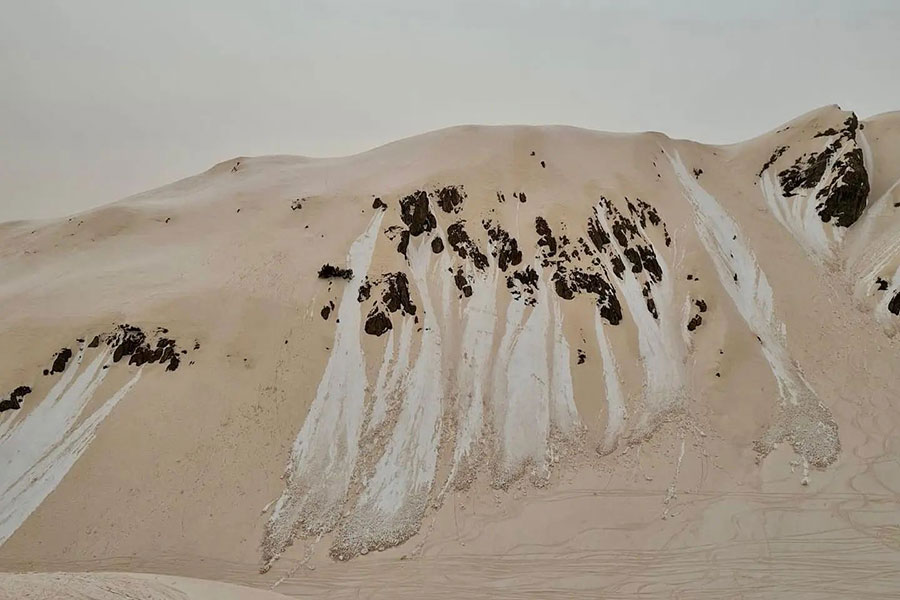 Just some sandy avalanches in Lech, Austria this week...

The Snow Headlines - 17th March
- Jungfrau region extends season to May 1st.
- More fresh snowfall across North America as start of spring stays snowy.
- Saharan dust turns ski slopes and skies orange in the Alps.
- Scottish ski areas lose snow on lower slopes but get fresh high up.
- World's deepest base (in Japan) drops 10% in a week from 6 to 5.4 Metres. 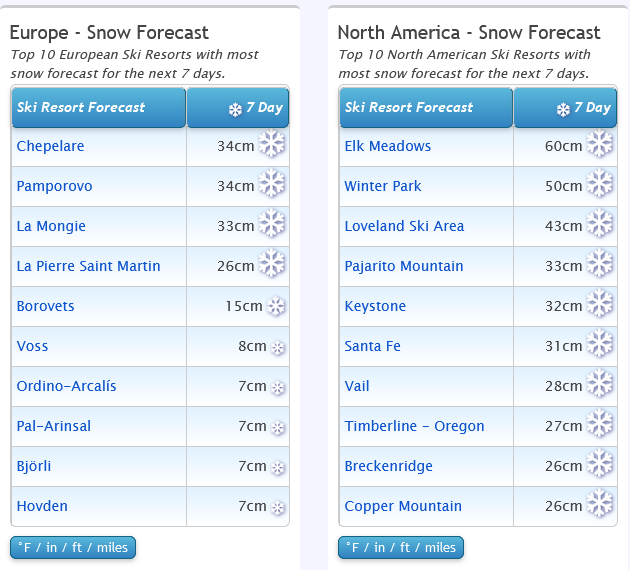 
World Overview
Europe
Springtime continues to gain a grip on much of Europe with sunny skies continuing to dominate and some glorious conditions on the groomed runs.

That said there has also been fresh snowfall again in the Pyrenees and down in the South-east of Europe which has seen a second week as one of the coldest and snowiest parts of the continent.

The Western alps also saw fresh snowfall to start the week and Tuesday brought an unusual if not unheard of phenomenon of orange skies and snow as dust from the Sahara blew across a large swathe of the continent, settling on the snow. It was reported over a wide area but the Austrian alps appeared to turn "orangest".

Up in Scandinavia spring has brought great conditions for many with long days and temperatures still around freezing. Scottish ski areas remain open but warm weather has impacted snow cover on lower slopes.

North America
There's been fresh snowfall across North America over the past seven days, the biggest falls occurring at the end of last week in the West (but with more on the way) and over the weekend in the east.

Against that good news, the overall springtime trend is inescapable and the first ski areas in the Midwest, West and East have closed for the season last weekend or announced the upcoming Sunday will be their last.

More resorts, however, say they're staying open later with a number extending seasons into May, so we're still far from the end. It's also worth noting that an increasing number of areas are no longer requiring evidence of vaccination for employees or visiting skiers and boarders as COVID restrictions ease.

Europe
Austria
It has been a largely sunny week in Austria, although some areas did report a light snowfall to start the week.

The biggest impact on the bright daylight though came on Tuesday in particular when dust blowing in from the Sahara turned the skies an eerie orangey-brown and coated the snow too.

Many Austrian ski areas are set to close before Easter, as is usually the case, either on the final weekend of this month or at the start of next, although resorts like Ischgl and Obertauern are open into May and several glacier areas later still.

France
There was some fresh snowfall in the French Alps at the start of this week to the delight of those in resort. Ski areas across the country reported 10-20cm of fresh powder to freshen up the slopes and provide a little boost to freeriding opportunities too.

Otherwise, there's a distinctively spring-like feeling in the air with temperatures gradually rising and lower slopes in particular in full thaw-freeze mode through each 24-hour cycle, with thaw currently winning the day.

All French resorts remain open, most fully so, and the World Cup finals are underway in Courchevel-Meribel, rounding off the competitive season for 21-22 less than a year before the 3 Valleys host the bi-annual Alpine Skiing World Championships in 2023.

Italy
Another mostly dry and often sunny week in Italy although there was some snowfall for resorts in the north and west of the country on Sunday and Monday and the coming weekend could see more light to moderate snowfalls on higher slopes in the Dolomites.

The trend is definitely towards warmer weather and thawing snow below 2,000m with temperatures hitting highs of +15C in valleys in the past few days.

Almost all Italian ski areas remain open however with good conditions on groomed slopes. Dolomiti Superski currently has the most terrain available.

Switzerland
A mostly dry week again in Switzerland although some ski areas in Valais and the south of the country reported a little fresh snowfall in the middle of the week, and there have also been overcast skies for much of the week across a wide swathe of the country.

Snow depths are down a little on a week ago with Engelberg posting just under 3 metres lying up on its glacier, the thickest snowpack in the country, albeit perhaps half the thickness of an average year reflecting the limited snowfalls this winter.

Snow depths are still good enough for most ski areas to be fully open now and able to see out the season. Indeed the Jungfrau region has just announced they'll have lifts running to May 1st after extending their season end date.

Scandinavia
One of the driest weeks of 2022 so far in Scandinavia and temperatures have been climbing above freezing in the afternoons for the first time in some more northerly parts too. But still, on the whole, good conditions across the region with most centres fully open and reporting decent snow depths - and the snow in good shape for the final 6-8 weeks of the season here.

Myrkdalen near Voss is posting the region's deepest base at nearly 3 metres (10 feet).

Pyrenees
It's the second successive week that the Pyrenees have been reporting some of the best conditions in Western Europe, with the mountains there seeing several more light to moderate snowfalls whilst the alps have stayed dry. Temperatures have been a little cooler than further north too, although here too it is now getting warmer at resort bases.

The last snowfall was reported on Monday for most and it has been increasingly sunny through the week since, although more snowfall is expected to start next week. Most areas remain fully open or nearly so with Andorra's Grandvalira having most of its 240km (150 miles) of slopes open, the largest area in the region.

Scotland
Scottish ski centres have seen some more snowfall – along with the usual occasional gales and rain – but the main impact of the past week, arguably, has been some warm daytime temperatures which have melted away the fairly thin cover on lower slopes, decreasing the amount of terrain available.

But centres do remain open and there have been some good blue sky days for snow cover on higher slopes.

Glencoe in the West has the deepest snowpack and highest percentage of its terrain open.

Remarkably, Bulgaria has remained much colder and indeed snowier than the alps to the north with lows at high altitudes in the Balkans hitting -20C at times in the past seven days and resorts not seeing highs much above freezing even in the afternoons.

There was snowfall to end last week and further snowstorms in the past few days to add a little more. Base depths at resorts like Bansko has also been increasing in recent weeks, now at 2 metres, whereas they've been dropping in most other parts of Europe.

North America
Canada
It has been a snowy week right across Canada with a series of snowfalls bringing fresh powder on repeat occasions over the past seven days. Things were particularly good at the weekend where ski areas in the West (Alberta and BC) and the East (Quebec/Ontario) were all reporting 20-40cm (8-16") accumulations of fresh snow and superb conditions. But then there were more snowfalls every 48 hours or so through the week.

Temperatures have been climbing with daytime highs now getting back above freezing in resorts, but generally staying 5-10 degrees below on the slopes.

Most of the country's centres will close within the next month but some including sunshine at Banff, Marmot basin at Jasper and Whistler Blackcomb plan to stay open into May and have the snow lying to get there (and more forecast).

USA
Successive snowstorms across the US at the end of last week brought a good top-up for most ski areas across the country.

Resorts in the West were hit first with 6-12 inch falls reported in the Sierra Nevada mountains of California and bigger accumulations further north.

Ski areas in the Rockies then saw 6-18" of fresh snow at the end of last week before the snowfall moved East and gave powder days in New England at the weekend.

Most areas have had drier conditions since the start of this week but there was more snowfall in the West Monday/Tuesday.

Against this good news, the season-long issue of below-average snowfall and warmer temperatures than usual is beginning to have a few negative consequences with one small Californian ski area announcing that it was closing earlier than expected at the weekend due to inadequate coverage. But most do have enough snow lying to see them through the final weeks (and in a few cases months) of the season with Alaska's Alyeska posting the deepest base in the world outside Japan of 16 feet.

There are hints of a late cold spell in the European forecasts, so we have our fingers crossed here...
The Admin Man 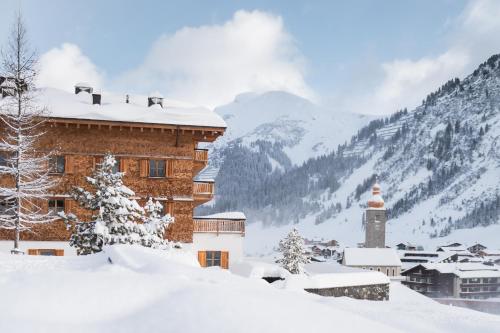 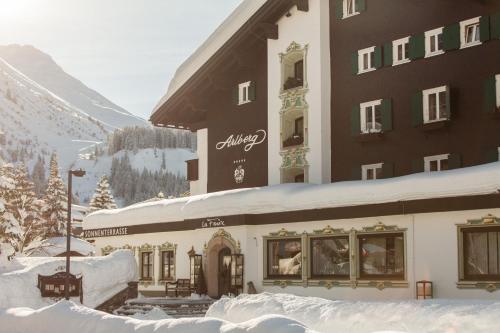 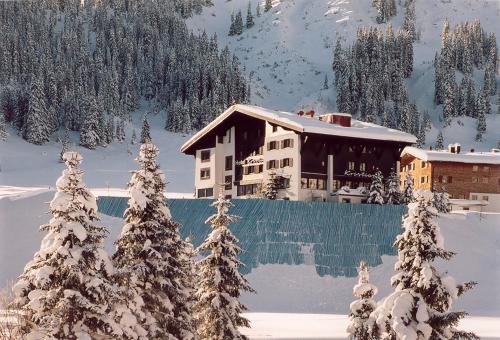 Snow is next forecast to fall in Austria over the next 2 days, in at least 50 Ski Resorts including Ehrwald, Lech, Seefeld, St Christoph am Arlberg and St. Anton am Arlberg.

At least 2 Austrian Ski Resorts are reported to be open.